Tyler Hamilton is an American former professional road bicycle racer. He is the only American rider to win one of the five Monuments of cycling, taking Liège–Bastogne–Liège in 2003. Hamilton became a professional cyclist in 1995 with the US Postal Service cycling team. He was a teammate of Lance Armstrong during the 1999, 2000 and 2001 Tours de France, where Armstrong won the general classification.

He is from the United States.

He attended Holderness School in Plymouth, New Hampshire, where he started cycling. After graduating in 1990, he attended the University of Colorado at Boulder as a ski racer and received a BA in economics in 1994 (although it has been alleged that he did not graduate). A back injury (two broken vertebrae while mountain bike training on ski jump) at the University of Colorado developmental ski team in September 1991 ended his skiing, and he switched to cycling.

The bicycle racing publication VeloNews reported that Hamilton and his wife Haven amicably separated in spring 2008 after nine years’ marriage, and the couple subsequently divorced. Hamilton disclosed in an interview on April 2009 that he had been treated for depression for six years.

He turned pro in 1995 for the Montgomery Bell Cycling team which later became the U.S. Postal Service cycling team and raced for them in 1997, 1998, 1999, 2000 and 2001 Tour de France. Hamilton protected Lance Armstrong in the mountains and was on Armstrong’s first three Tour de France winning Postal squads and quickly grew to stardom.

Hamilton acted as a scout in individual time trials, riding as hard as possible to provide time-split comparisons for Armstrong. During this time he won the 1999 Danmark Rundt and the 2000 Critérium du Dauphiné Libéré, winning stages 4 and 5.

In 2001, Hamilton left U.S. Postal for Team CSC. He was made a leader under manager Bjarne Riis. Hamilton fractured a shoulder in a crash in the 2002 Giro d’Italia but still managed to win stage 14 and finish second overall, under 2 minutes behind race winner Paolo Savoldelli.

Later that year, he participated in the 2002 Tour de France, riding in support of Carlos Sastre and finished 15th overall. In 2003, Hamilton became the first American rider to win Liège–Bastogne–Liège, breaking away from a select group of riders around four kilometers from the line in wet conditions.

He later won the Tour de Romandie that year, as he prepared to race the Tour de France. In the 2003 Tour de France, he broke his collarbone on the first stage in a pile-up. Instead of withdrawing from the race, he stayed to finish the tour and exceeded everyone’s expectations when he was able to follow and attack Armstrong up Alpe d’Huez on stage 8. Later, he rode one of the Tour’s most memorable feats, winning stage 16 with a 142 km solo breakaway, gaining two minutes over the field.

For his stage win, Hamilton was awarded the Coeur de Lion prize (French for Heart of the Lion, the name of the cheesemaker that sponsored the award), as the most daring racer of the stage. He finished the 2003 Tour de France 4th overall and returned home nationally recognized.

In 2004, Hamilton left Team CSC and joined the Phonak Hearing Systems. He assembled a team of good, well-known riders and prepared for racing in the upcoming Tour de France, winning the 2004 Tour of Romandie for the second year in a row.

Furthermore, he placed 2nd in the 2004 Dauphine Libere, beating Armstrong up the Mont Ventoux time trial which promoted him to one of the Tour de France favorites. However, in the 2004 Tour de France, he dropped out on stage 13, after back pain mostly due to a crash on stage 6.

His former wife, Haven Hamilton and golden retriever Tugboat became recognizable at the races, appearing in photos and interviews. The bicycle racing publication Velo News reported that Hamilton and his wife Haven amicably separated in spring 2008 after nine years’ marriage, and the couple subsequently divorced. Hamilton disclosed in an interview on April 2009 that he had been treated for depression for six years.

At the 2004 Summer Olympics in Athens, Hamilton won the gold medal in the men’s individual time trial. That medal was placed in doubt on September 20, 2004, after he failed a test for blood doping (receiving blood transfusions to boost performance) at the Olympics. Two days after the announcement of his positive test at Athens, the IOC announced Hamilton would keep his medal because results could not be obtained from the second sample.

The Athens lab had frozen the backup, which made it impossible to repeat the test. The Russian Olympic Committee appealed to the International Court of Arbitration for Sport to give Hamilton’s medal to Russian silver medalist Viatcheslav Ekimov. However, on June 27, 2006, the court rejected the request.

In the Vuelta an España, he won the stage 8 time trial on September 11, 2004, but left the race six days later, citing stomach problems. As the winner of the stage, he was subjected to a doping test.

He was told by the Union Cycliste Internationale (UCI) on September 13, 2004, that his two samples from two days earlier showed a “foreign blood population.” After supporting Hamilton, Phonak team managers withdrew their support after a second member of the team, Santiago Pérez, was found positive for the same offense at 2004 Vuelta an España.

The positive sample at the Olympics and the positive test at the Vuelta were not the only indications that Hamilton was manipulating his hematocrit level. In April 2004 his blood was found to have a high ratio of hemoglobin to reticulocytes (young red blood cells), indicative of EPO or blood doping. His score was 132.9; a clean athlete would score 90.

The UCI suspends a rider if the score exceeds 133. This sample also showed someone else’s blood was in his bloodstream. However, neither piece of evidence in isolation constituted a positive drug test (and the test for a mixed cell population had not yet been adopted), so no action was taken.

On April 18, 2005, Hamilton was sanctioned by the United States Anti-Doping Agency and received a two-year suspension, the maximum sentence for a first offense.

On May 18, 2005, he appealed to the Court of Arbitration for Sport but, after allowing Hamilton to gather evidence, the court dismissed his appeal. Hamilton claimed the UCI-sanctioned test was insufficiently validated (and may have returned a false-positive result) and that some of the agencies involved had concealed documents that would support his case. He also maintained that, even if foreign cells were present, they were natural and not the result of a transfusion.

Hamilton was banned until September 22, 2006, two years from the date his “B” sample in the Vuelta an España was found positive.

In 2010, Hamilton was subpoenaed by a federal grand jury to testify in their doping investigation of Lance Armstrong. Hamilton admitted in his testimony that he took banned performance-enhancing drugs during his cycling career. 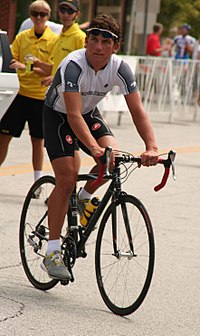 Beginning in spring 2007, Hamilton began cycling again, having completed his two-year ban. He rode briefly for Tinkoff Credit Systems. It supported Hamilton in the face of Operation Puerto rumors. However, on May 9, with rumors circulating about Hamilton’s role in the April 30 dossier, the team dropped him for the 2007 Giro d’Italia.

In September 2007, Tyler competed at the US national championship in South Carolina, coming sixth in the time trial and 12th in the road race. In December, Rock Racing said Hamilton would ride for them in 2008. Rock Racing was a professional team on the US circuit. Hamilton did not ride in the team’s season-opening Tour of California because of that race’s rules against riders involved in doping investigations.

Wearing his Rock Racing gear, Tyler Hamilton finished second of approximately 60 category one and two riders on March 9, 2008, at a collegiate criterium in Denver’s City Park.

On April 17, 2009, it was revealed that Tyler had failed an out of competition drug test; this time for a banned steroid (DHEA), which he claimed to be taking for anti-depression purposes despite knowing that it is on the World Anti-Doping Agency banned list. He announced his decision to retire. In June 2009, Hamilton was given an eight-year ban after testing positive for a banned anti-depressant.

Since September 2009, Hamilton has been providing private training services to other cyclists

Currently, his net worth is under review. No doubt that he is earning good pay from his career.